Television viewers around the world know Sam Roloff from his appearances on his brother’s reality show, “Little People, Big World” on The Learning Channel. But art connoisseurs know Roloff as a prolific Portland, Oregon-based painter with an eye for beauty, whimsy, and piquant social commentary. Now, Roloff is collaborating with Bay Area artist, Shawn Webber and Joseph Paul Lichnovsky and are known as The Milk Bar Crew, on a unique series of paintings that seamlessly unites all artists’ inimitable styles. Wry, symbolic, and sexy, the paintings are the product of the artists’ 24-year-long friendship. Embedded in the paints, canvases, and panels are the thousands of miles the artworks traveled up and down the West Coast as the painters traded them off, each contributing new imagery, building upon past layers, before handing them off again for the next round. 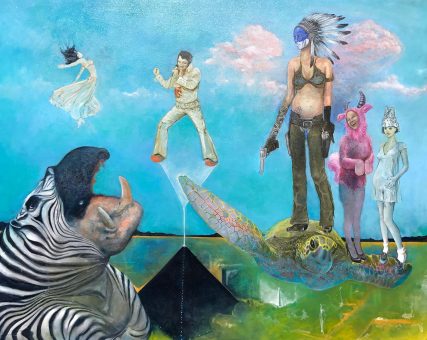 Stylistically, the paintings are a blend of realism, surrealism, Pop, and Graffiti Art. And while some of the figure models depicted in the paintings are exotic dancers from Portland’s world-famous strip-club culture, not all the subject matter is fun-and-frothy. Some pieces deal with world affairs and events culled from the day’s headlines: the plight of Syrian immigrants, the Anonymous protest movement, and the standoff between the Standing Rock Sioux tribe and supporters of the controversial Dakota Access oil pipeline. 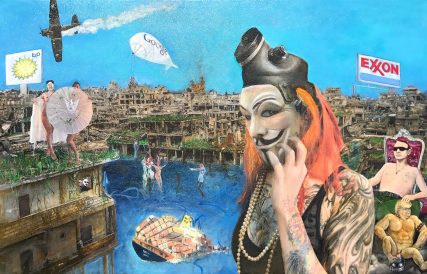 Topical, deeply personal, highly symbolic, yet never inaccessible, the paintings have a history stretching back nearly a quarter-century. Roloff and Webber met in 1992 when they were students at San Francisco Art Institute. They became friends and kept in touch throughout the ensuing decades. While they had never worked together until a year ago, the two are no strangers to collaboration—Roloff having been involved in collaborative projects in Prague, Czech Republic, and Webber as a longtime member of The Oyster Pirates, a San Francisco art collective known for collaborative paintings and workshops. 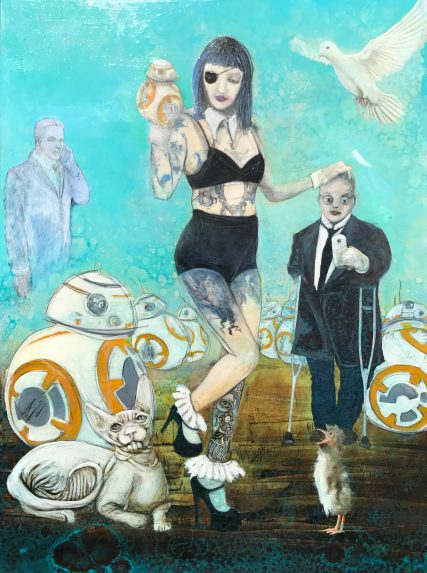 The thirteen oil paintings in the current exhibition began a year ago with a one-painting experiment. The exchange proved so stimulating artistically that the artists decided to keep the momentum going. Spontaneity and experimentation are at the heart of the process. As Webber notes, “The rules are: There are no rules.” The collaboration has influenced the individual styles of each artist—in subject matter, color palette, even technique. “My painting style tends to be fast, high-energy, very expressionistic. But since working with Shawn, I’ve been using some smaller brushes and painting with more detail.” Individual works by Roloff and Webber will be displayed in the exhibition alongside the collaborative paintings to illustrate both the purity of each artist’s vision and the influences of their aesthetic cross-pollination. “A lot of the process,” Webber adds, “is losing your ego: giving up your ego to the other artist.” Adding to the visual mélange is subtle detail work the men invited another artist, Joe Lichnovsky, to contribute to the melting pot of styles. 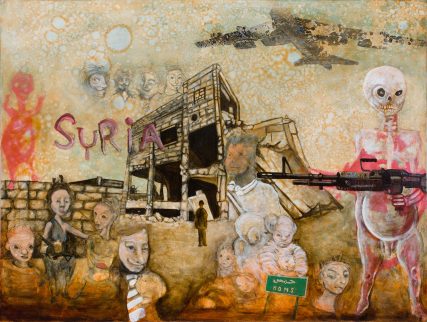 Lichnovsky delved into the 3 dimensional realm of art in junior high and high school. Starting with Halloween masks, he teamed up with a friend and created many claymations and live action super 8 films. Relocating to LA with his brother, James, Joe networked into working as a production assistant and puppeteer on a couple of high profile films, Total Recall, and Robo Cop 2. He also did work for the sci fi channel creating props, characters, and paintings. Teaming up again with brother James, they launched a toy prototype company, Sculptomatic in 1998. Using clay and wax as a medium, together they created toys, collectibles, and action figures; from Harry potter to Star wars, Shrek to Lost in space, and cartoon classics, Winnie the pooh, Bugs bunny, and many others to numerous to mention. 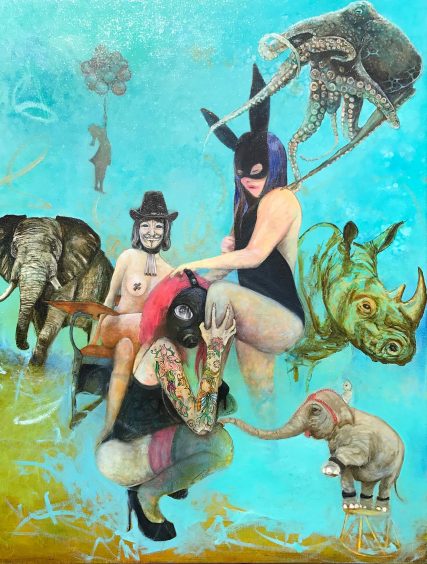 The crew’s personalities are refracted through the prism of the paintings, with their visual dialogue between whimsy, sensuality, and darker subject matter. In one painting, a shirtless woman puffs on a cigarette, the smoke mingling midair with smoke billowing out of a nuclear power plant. Other paintings feature nude women wearing gas masks, a skeletal figure wielding a machine gun, and a female figure riding a hammerhead shark in a richly depicted undersea environment.

References to pop culture abound, among them the Google blimp, Elvis Presley in his iconic outfit from the film “Jailhouse Rock,” and BB-8, the lovable droid in “Star Wars: The Force Awakens.” Art-historical references also make cameos: Jeff Koons’ Balloon Dog , Banksy’s Floating Balloon Girl , a “Companion” figure by Kaws, and Caspar David Friedrich’s Wanderer above the Sea of Fog . In the long lineage of self-portraiture, Roloff makes an appearance in one painting, dapperly attired in a black suit and tie. Both men include coded references to themselves in the form of animal life: Webber as an elephant running free in the wild and Roloff as an elephant bound to a life in the circus—a reference to the crutches Roloff relies upon to get around. The paintings also depict the signs, literally, of their journeys from germination to completion: road signs from Interstate 5 and California Highway 1, which the artists traversed while hauling the paintings back and forth between Portland and San Francisco.

Fans of all artists will enjoy identifying their individual contributions and passages of stylistic interplay. And viewers discovering Roloff and Webber for the first time will pick up on the energy flow crackling between their distinctive sensibilities. A jazz-like sense of improvisation permeates these witty and engaging works: Here are two painters at the top of their forms, trading riffs with self-assurance and infectious enthusiasm. The effect, Roloff observes, is one of inspired chaos: “Throw everything in the mix and let it dance!” 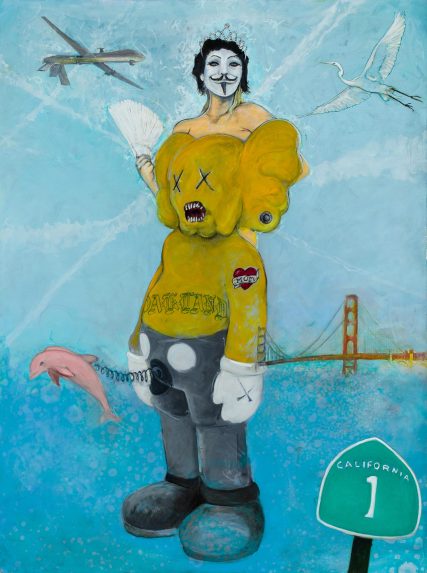